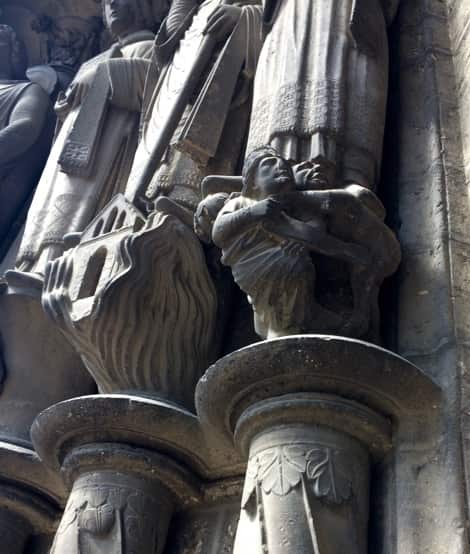 Living waters are a powerful symbol in ancient texts. Not just texts of language either: above is an image I took earlier this year of one of the pediments to the South Transept at Chartres Cathedral. It’s a detail of the Porch of Martyrs with Saints Theodore, Stephen, Pope Clement and Saint Lawrence. After the martyrdom of Clement (by being thrown into the sea attached to an anchor) legend has it that a divinely created shrine appeared under the waters. In this pediment at Chartres, stone “waters” engulf his shrine.

All of Chartres has been called a Mutus Liber, a “Mute Book”. As Emile Male says in The Gothic Image:

Victor Hugo said: “In the Middle Ages men had no great thought that they did not write down in stone.”

And here’s more from Emile Male on what it meant to a person of the Middle Ages to enter such a cathedral:

Side by side with the story of this vast universe, man’s own history is written. He learns that life must be a conflict, a struggle with nature in every month of the year, a struggle with himself at every moment, an endless psychomachia. And to those who have fought a good fight the angels in the heavens above hold out crowns. Where is there room for doubt or even for disquietude of mind?

On entering the cathedral it is the sublimity of the great vertical lines which first affects his soul. The nave at Amiens gives an inevitable sense of purification, for by its very beauty the great church acts as a sacrament. Here again it is an image of the world. The cathedral like the plain or the forest has atmosphere and perfume, splendour, and twilight, and gloom. The great rose-window behind which sinks the western sun, seems in the evening hours to be the sun itself about to vanish at the edge of a marvellous forest. But this is a transfigured world, where light shines more brightly and where shadows have more mystery than in the world of fact.

Already he feels himself in the heart of the heavenly Jerusalem, and tastes the profound peace of the city of the future. The storm of life breaks on the walls of the sanctuary, and is heard merely as a distant rumbling. Here indeed is the indestructible ark against which the winds shall not prevail. No place in the world fills men with a deeper feeling of security.

How much more vividly must this have been felt by the men of the Middle Ages. To them the cathedral was the sum of revelation. In it all the arts combined, speech, music, the living drama of the Mysteries and the mute drama of sculpture.

To Find This Taste Today

To find this “taste of the profound peace of the city of the future”, a beautiful and powerful phrase, is one equally relevant to us today. It reminds us of Zen statements on Realization, on the Absolute Principle. This taste is one that we look for with intensity, whether we know it or not. We look for living waters.

How can we continually find intensity in life – without resorting to acting out in ways that we ultimately realize cheat us – such as with sex and/or drug addiction? How can we continually re-encounter living waters? We know we are destined for inner intensity, it is our real life; despite what this materialistic, violent culture might suggest. Isn’t violence in thought and deed just another addictive substitute for an inner intensity of being that we dearly long to experience?

Saint John of the Cross said:

The soul now feels that it is all inflamed in the divine union, its palate is all bathed in glory and love, that in the intimate part of its substance it is flooded with no less than rivers of glory, abounding in delights, and from its depths flow rivers of living water, which the Son of God declared will rise up in such souls.

Whoever believes in me, as the Scripture has said, ‘Out of his heart will flow rivers of living water.’

It’s the experience of “entering the cathedral” that contemporary women and men crave, an experience of the “sum of revelation”. An increasingly corporatised world tells us this is not important – that fulfilling our outer “lacks” is what is the important and the pressing concern.

We don’t have to belong to a particular religion to find this taste. But we have to be open to the power of symbol as it acts and lives in our hearts.

To stay connected with living waters (or with another symbol that suits you) is the great challenge of our time. And this is something that a deep and open investigation, possibly in therapy and counselling, is sometimes able to provide.