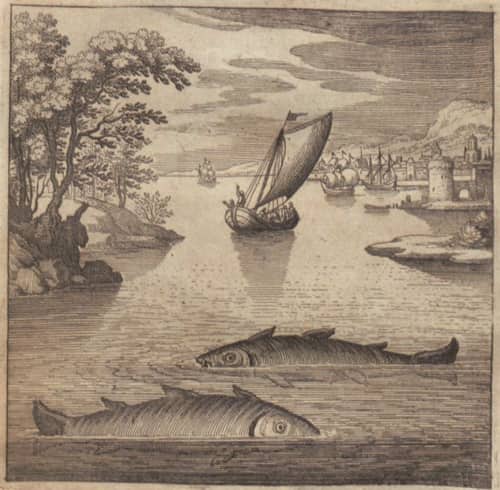 The Sea is the Body, the two Fishes are Spirit and Soul (Anima).

This page is a commentary on Figure 1 of the Book of Lambspring. The Figure is prefaced as follows:

Be warned and understand truly that two fishes are swimming in our sea.

The Sages will tell you
That two fishes are in our sea
Without any flesh or bones.

Let them be cooked in their own water;
Then they also will become a vast sea,
The vastness of which no man can describe.
Moreover, the Sages say
That the two fishes are only one, not two;
They are two, and nevertheless they are one,
Body, Spirit, and Soul.

Now, I tell you most truly,
Cook these three together,
That there may be a very large sea.

Cook the sulphur well with the sulphur,
And hold your tongue about it:

Conceal your knowledge to your own advantage,
And you shall be free from poverty.
Only let your discovery remain a close secret.

Although some commentators see Figure 1 as depicting a potentially difficult situation (for example, a constellation of complexes producing unhealthy tensions), we do not read it this way.

Our Gestalt-oriented approach is that Figure 1 shows us the way things are in essence; and the way that our Knight will possibly be able to see things, once he (or we) have completed the work of the Lambspring series.

We see a beautiful, natural scene, over which the eye can roam, explore and appreciate. It has distinct foreground and background elements. The Figure has the sense of a gestalt, of a whole that is greater than the sum of its parts. With any image that has a sense of a gestalt, it’s useful to hold it in memory and meditate on it as a whole. Our responses will be ours alone.

It’s also interesting to meditate on some of the parts to Figure 1, which we’ll do in the following sections.

The sea is a powerful symbol for the unconscious and/or the subconscious (thinking of Moby Dick or Jonah and the Whale). Another way to look at the sea is as symbolising the Tao (“The Watercourse Way”). The Tao can be thought of as that from which our consciousness arises, and that which itself cannot be named (“The Tao that can be named is not the real Tao”, says the Tao Te Ching.)

Of course, as we are told in the caption to the image, “The Sea is the Body”. The body as the domain of the unconscious is an important aspect of the work in the Lambspring series, as we’ll see in later Figures. The unconscious can be considered as a dimension of the phenomenologically lived body. This corporeal unconscious:

… is not to be sought in our innermost [psyche] behind the back of our “consciousness”, but before us, as the structure of our field. (Merleau-Ponty)

The Boat and its Occupants

A boat under sail is depicted in centre frame. This placement seems to indicate its importance. Is it the Knight (from the previous Cover image) who waves out? And does the flag from the furnace (Cover image) also wave here at the masthead? (Both flags wave in the same direction: evidently it is East, from where the sun rises, a direction important to alchemists.)

The boat is possibly sailing towards the fishes that occupy the foreground. Does the Knight wave out to us, the viewers of the image, or has he recognised the fish and perhaps realised their importance?

Gestalt therapy recognises the importance of figure/ground relationships. The “lively figure” arises from the background and holds our attention, until it naturally completes a gestalt, receding into the background. Here the fish are such a figure: they arise from the water, hold the foreground, are large and are in contrast to the somewhat muted elements of the landscape background. They are truly a lively figure.

Despite alternative readings of Figure 1, we see the two fish as being in close relation to one another. Although they face in opposite directions, we imagine that their eyes miss nothing, and that the fish understand a tension between them. (The artist seems to have taken great care in depicting these eyes.)

The fish can be seen as visions arising from the unconscious. They are not physical fish (but are “without any flesh or bones”).

And, as we’re told in the caption to the image (“… the two Fishes are Spirit and Soul”) and as we’ll see in the commentary to later Figures, these two fish as soul and spirit have needed to come to terms with each other! (This is really what the entire Lambspring series is about – the development of a deep connection between spirit and soul, within the container of bodily consciousness.)

Some renderings of the Chinese Yin-Yang symbol are as opposing and interrelated fish, and we think this reading sheds light on the symbolism of these fish, and what they have to tell our Knight about reality. (See this lovely TED video about Yin-Yang.) And historians have suggested that the Yin-Yang symbol is influenced by the flow of water, by the eddies, currents and inter-mixings of waters of different opacities.

The fish are half under the water, half above. There are aspects of them that are conscious, and aspects unconscious. This is how we are as healthy individuals, aware to some extent, yet unaware of many of our day-to-day functions.

Let them be cooked in their own water;
Then they also will become a vast sea,
The vastness of which no man can describe.

So by gentle cooking, the fish of soul and spirit will be seen as aspects of the illimited Tao of our bodies.

For Aristotle, the soul (of a human, an animal, or any other living thing) is what animates that living thing, and this in a complex, unified way. This is different from Plato’s view, in which a living thing “has” a soul. In Aristotle’s view, the soul animates (anima) each and every cell of that living being, so there is no concept of the being “having” that soul. To Aristotle, we know the nature and action of soul through its actions, through the effects it has on other things.

Gestalt takes an Aristotelian rather than a Platonic view of the psyche (soul). In Gestalt practice this means we take a holistic, action-oriented view of the person. We see how change can occur naturally for a person by enabling them to increase their awareness sufficiently for them to see options they might not otherwise have seen.

We spoke above about the fish being partly above and partly below the surface of the water. We can think of our conscious selves as the parts above the water, as powers-to-act with conscious awareness.

Yet the fish remind us of our unaware powers as well. The Gestalt lens (taking the lead of Aristotle) says that the aware self and the unaware powers are in practice an indivisible whole: the organism is a living complex whole, a living gestalt.

…That the two fishes are only one, not two.

We are told “hold your tongue” about the work. In alchemical practices, containment was important. There are many references in alchemy to vessels and their ability to prevent energies from becoming dispersed.

We speak also of the therapeutic container, and the value of privacy and confidentiality in therapeutic work, and how this heightens the effectiveness of the work.

Our reading of Figure 1 is that we are being shown a vista of the way of reality, from a Taoist or an Aristotelian viewpoint. It is a view that accords with Gestalt’s field-oriented approach.

Our Knight may have much work to undertake to have an actual experience of this view, of himself as integrated with the cosmos (as we shall see in subsequent Figures), but he is given here an insight into the potential goal.

This goal is about a conjunction – the coniunctionis as it was called by the alchemists, by which they meant the work one must undertake to unify body, soul and spirit. It is about the sea and the two fishes finding themselves, ultimately, in a serene harmony. It is about avoiding the reactions of nature if, over time, we lose the Tao. (“If nature is violated she takes her revenge”, said Jung.)