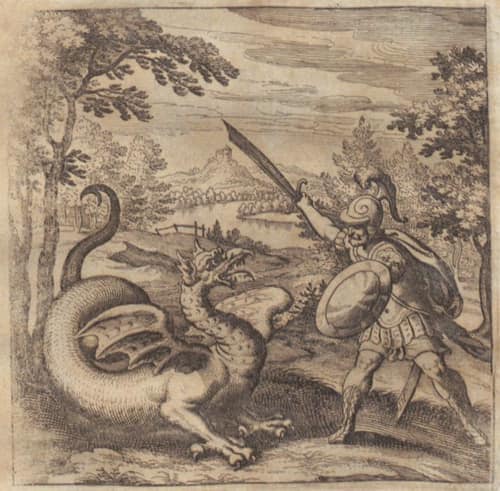 This page is a commentary on Figure 2 of the Book of Lambspring.

The Figure is prefaced as follows:

Here you straightaway behold a Black Beast in the forest.

The Sage says
That a wild beast is in the forest,
Whose skin is of the blackest dye.

If any man cut off his head,
His blackness will disappear,
And give place to a snowy white.

Understand well the meaning of this head:
The blackness is called the head of the Raven;
As soon as it disappears,
A white colour is straightway manifested;
It is given this name, despoiled of its head.

When the Beast’s black hue has vanished in a black smoke,
The Sages rejoice
From the bottom of their hearts;
But they keep it a close secret,
That no foolish man may know it.

Yet unto their Sons, in kindness of heart,
They partly reveal it in their writings;
And therefore let those who receive the gift
Enjoy it also in silence,
Since God would have it concealed.

The Figure presents a man (perhaps our Knight from the Cover image?) in battle with a winged dragon (the “wild beast”). Our man has both a shield and a sword. He seems to be wearing boots made of scales from another dragon.

The battle is set in a pastoral landscape containing a placid river or lake. Perhaps this more human-oriented landscape depicts somewhere closer to consciousness than the wide sea of Figure 1.

Some readings see this Figure as depicting polarities that must struggle to overcome each other. We read the image as a depiction of what can take place in the beginning of a therapeutic relationship: the encounter with, recognition of, and assimilation of shadow aspects of ourselves. It’s more coming to terms with, than overcoming.

We are told that the black raven appears upon slaying the best. Medieval alchemy saw the black crow or raven as often appearing at the beginning of the work, leading the adept away from the material world and into inner realms, and into encounters with darker parts of the psyche. Hence the caption “Putrefaction”: a decomposition and rotting of material attitudes and values, to allow for their substitution with growth and new fruit. Alchemy saw this as the nigredo (blackening) stage, prior to the albedo (whitening) to come.

(An interesting side-note to this is that in alchemy, even the nigredo stage has to be achieved.)

By shadow we mean those parts of ourselves that we find unacceptable and that we might repress within ourselves or project out onto others. As implied by the text, working with the shadow can be demanding work – it’s work with the “wild beast”. It’s only by coming to terms with the beast that its head becomes cut off (i.e. it becomes transformed; first to a blackness and then to white). This means assimilating the alienated parts back into ourselves.

The fact that our Knight is wearing boots possibly made from the scales of another dragon could mean that he has already assimilated some “dragon” qualities… but in the conflict of Figure 2 there seem to be more to be assimilated.

It could also hint at the fact that we always contain some aspect of that which we find the most irritating or the most difficult – and contain that aspect “right down to our boots”! (This idea is also present in the Yin-Yang symbol, where each side contain a drop of its opposite.)

Gestalt therapy uses the idea of a topdog and an underdog, and how these play out in our inner struggles. We can see the topdog as our conscious desires and thoughts, and the underdog as the unconscious needs or desires. These can fight with each other. Examples are:

We wonder why the topdog (conscious mind) does not win; but the reality is that the underdog (disowned or unconscious mind) is the one that holds the power. It might be a part that we call “lazy”, “selfish” or another negative word. If we take the time to look and understand we can use the wisdom of the underdog to feel whole again. The truth is that we never can really get rid of these other parts, but we can tame them and understand our needs more clearly.

If we can see where the real power lies then rather than trying to overcome, we can learn, integrate and accept our wholeness.

In Gestalt we welcome dialogue with shadow elements. We are trying to find out more about them, and possibly more of what they want of us. They are parts of us and by finding out about them (assimilating them consciously) we can form a gestalt, a whole greater then the sum of owned plus disowned parts.

One way we do this is in so-called chair work, in which less well-known and possibly problematic parts of ourselves are imagined to sit in an empty chair (usually in the therapy room). We can use several empty chairs at once, if that feels right.

In some Gestalt training schools, Parts Parties are held. Each trainee comes dressed as a part of themselves, possibly a shadow part they particularly dislike in others. This is an example of the experiential approach taken in Gestalt: don’t just conceptualise the shadow, but turn up dressed as the viking or the whore in a group setting and observe what plays out! (Gestalt therapists do not expect their clients to undertake such as experiment.)

Much is being written about the rise in narcissism, brought about, in part at least, by our saturation in social media, and by technologically and financially dominated views of the world.

Although we all to some extent have narcissistic qualities, the extreme narcissist is usually unable to undertake the reflective process to which our Figure 2 points. The narcissist could possibly be “the foolish man” our writer speaks of in the Text. Those who benefit from the psychological inquiries we are discussing here are best to enjoy these changes in silence, when in the company of such unfortunate fools!

The Figure describes important shadow work that anyone who enters therapy needs to undertake, in some form. Many people find that integrating shadow aspects of themselves makes them more accepting of themselves, accepting of all their parts, and so offers relief from anxiety and excessive self-consciousness.