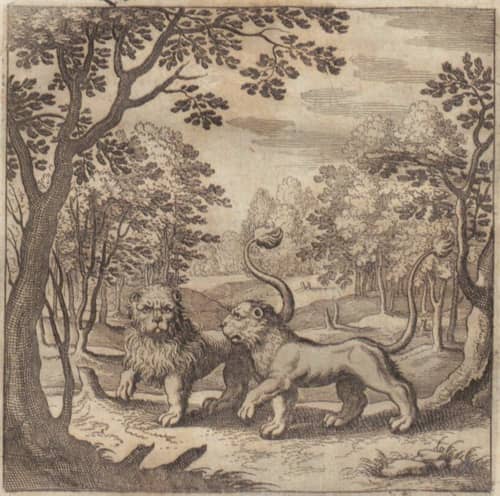 This page is a commentary on Figure 4 of the Book of Lambspring. The Figure is prefaced as follows:

Here You Behold a Great Marvel – Two Lions are Joined into One.

The Sages do faithfully teach us
That two strong lions, to wit, male and female,
Lurk in a dark and rugged valley.

These the Master must catch,
Though they are swift and fierce,
And of terrible and savage aspect.

He who, by wisdom and cunning,
Can snare and bind them,
And lead them into the same forest,
Of him it may be said with justice and truth
That he has merited the meed of praise before all others,
And that his wisdom transcends that of the worldly wise.

Deep in the Forest

We were told in the text to Figure 3, speaking of the deer and the unicorn, that it is important “To couple together, and to lead them in and out of the forest” and it seems that in Figure 4 we are further on into this journey – leading the pair further into a forest. The pair appear now as male and female lions. The trees overhang more so than in Figure 3: the lions appear in a grove, deep in the forest (they “lurk in a dark and rugged valley”).

The image may be saying that this work of nurturing the communion of soul and spirit is to be performed in such a way that it works deep within the unconscious: it’s not merely enough to learn book facts and to enact rules, to make this change.

The male lion (spirit) looks straight at us – this is the direct way of spirit, the eye-catching engagement of the teacher or master with the student. The female lion’s gaze is directed toward the male rather than to us – more indirect, as far as we are concerned, with some of the tangential feel of soul. But soul keeps an eye on spirit (possibly to see that it doesn’t overstep its mark!).

And, similar to what we saw in Figure 3 (the raised legs of the deer and the unicorn), there is a correspondence here between the lifted paws of the two lions. In this case there’s been a switch, with the male raising his right paw and the female her left. It’s possible that they’re each presenting their essential natures, in open dialogue with each other. Each needs to be seen truly by the other; each needs to live truly and majestically as they authentically are.

In Gestalt, it has been stated that “many phenomena could not exist if their opposites did not also exist” (PHG, p 43). Simple examples of this are day and night, cold and hot, young and old.

And any individual is:

“…a never-ending sequence of polarities. Whenever an individual recognises one aspect of him (or her) self, the presence of the antithesis, or polar quality, is implicit” (P & P, p 61).

Returning to our lions of spirit and soul, it could be said that these cannot truly be themselves, authentically, without the other. Spirit without soul and soul without spirit are unstable constructs. And the individual for which one or other of these remains merely “implicit”, rather than nurtured and actively developed, is less whole than they could be.

And as Jung pointed out, polarities that are too much out of balance are susceptible to enantriodromia, where a strongly-held conscious standpoint results in an even more strongly-held – and opposite – unconscious attitude. (Hence rigid lawmakers are found to have seedy secrets.)

In alchemical works such as the Book of Lambspring, it was not enough for the author to write his thoughts in words. The images are important – they are meditative devices, carrying much subtlety that can appeal in different ways to different people, when reflected upon deeply. As meditative devices they are intended to be held in mind, to be wrestled with.

For example, for us two meditating on this figure, we find a possible reference, in the balanced lifted and lowered front paws of each of the lions, to two yin/yang symbols. If this reference is intentional, it perhaps marks a clear intent in both beasts (i.e. in soul and in spirit) to form a balance not only between themselves and the other, but a balance within themselves as well.

Poetry of the Forest

Gaston Bachelard presents a rich reverie on forest in his book The Poetics of Space (see the chapter “Intimate Immensity”):

The artist of Figure 3 has been at pains to include us in immediate immensity, in his depiction of the work on the two lions, and how the Master must “lead them into the same forest”. The work for each of us, too, is valiantly to come to the level of deep poetics; to not remain stuck in bookish learning but to be open to the poetic nature of this inner work, to allow ourselves to be led into the forest.

This is the second of three Figures that underscore the important of unification (the coniunctio). The caption to the image is explicit: “The Spirit and Soul must be United in their Body”. The trio of spirit, soul and body are an essential triangle to which we must attend, and hope to unify. We’ve been led into this lesson again!