Our Skills in Couple Communication course is now online.Find out more and sign up for the course

Introduction – What is Adult Attachment Theory?

Adult Attachment theory is currently receiving a lot of attention in the Couples therapy world, as ongoing research provides validation for its basic ideas. These ideas centre around the realisation that the ways in which attachment can go wrong within a couple relationship mimic the ways attachments were formed between caregivers and infants.

This research started as far back as the 1950s on how infants respond to different parenting behaviours. In a simplified model, parents can be classified as either Predictable or Unpredictable; and also as either Attentive or Inattentive. This leads to four possible categories of parenting behaviour, potentially leading to four possible attachment styles in the infant:

This approach to Couples work follows the logic that adults who learned a particular attachment style (as infants) find this same style being re-enacted in their intimate relationships.

What Shows Up in Counselling

This is what we see so often in counselling, as Couples therapists. We see couples where a combination of insecure styles is playing out (categories 2 and 3 above), yet the individuals in the couple are often quite unaware that this is happening. They believe they are having problems with points on which they disagree, but in fact the main issue may be their reactions to their partner’s different attachment style.

It’s as though we’re attracted to a particular partner in order to achieve healing of an early attachment wound – yet we’re unable to “stand outside” the ensuing dynamic to get a foothold on how we might change it.

(Current research suggests there may also be other reasons besides family-of-origin for particular attachments styles to appear in adult relationships – but this simple model is usually a good starting point.) 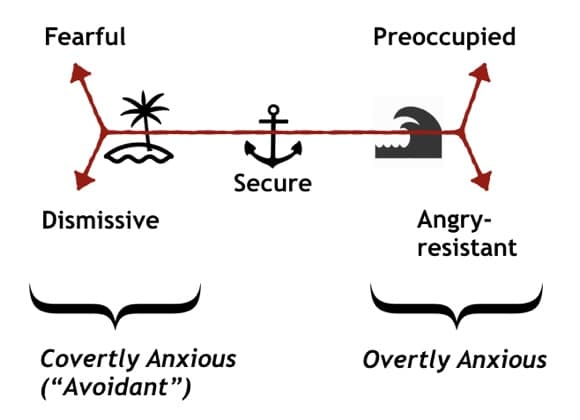 An Overview of Adult Attachment in Relationships

(Referring to the numbered points above, the diagram depicts point 2 at the left end, point 3 at the right end, and point 1 in the centre.)

In this model, Couples work includes:

It’s important to note that the styles usually only make themselves evident in intimate relationships, and then only when one or both of the partners becomes triggered. (The styles appear “when the stakes are high”.) This is why in the “honeymoon” period of a relationship, before there is a high level of commitment, the styles may not be evident. 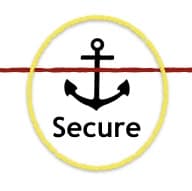 In this style the couple are happy play-mates, enjoying their time together and playing creatively at life. They’ve got the sense of “having each other’s back”. There’s a lot of physical contact, not just sexual. They’re like the traditional King and Queen, ruling benevolently over the family domain, and providing a strong sense of containment both for themselves as a couple and for their children, if they have them. (The King and Queen analogy can still apply well in same sex relationships.)

The Secure style is called the Anchor because that’s the function it performs for the two individuals. The relationship itself is providing an anchor for each of the partners in it.

At the two ends of the axis in the diagram above are the insecure poles. Individuals feel anxious and insecure at either pole.

Individuals can stay locked in their respective positions for many years, to the detriment of the relationship and the wellbeing of the partners in general. Often, one partner will be at one pole and one at the other pole (we see this a lot in therapy); but this is not always the case.

The Island and the Wave

Individuals at the two poles, indicated by the Island and the Wave, process stress in a relationship very differently.

The Island styles tend to process internally and self soothe. They prefer to avoid conflict and minimise the intensity and pressure they feel in an argument by removing themselves or withdrawing in some way. They tend to feel better with less closeness, as too much can feel overwhelming. They can seem like a desert island, completely self-contained and needless.

Wave styles on the other hand seek closeness, reassurance and intimacy. They tend to try to resolve issues almost immediately and find it more difficult to soothe themselves. They usually like to talk things through and become more anxious when there is little contact. They can be like a wave at the beach, crashing in only to recede soon after.

At each pole, there are broadly two different ways in which an insecure attachment can play out, and we’ll touch on these now.

Wave No. 1: The Preoccupied Attachment Style 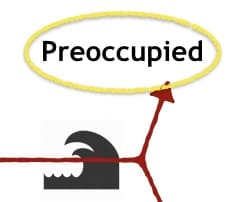 In this style, an individual in a couple relationship may become preoccupied with the verbal and/or non-verbal cues they receive from their partner, in an interaction. If these cues are insufficient, or non-existent, the individual may remain in a vigilant, aroused state, in the hope, finally, of receiving a response.

They will try to regain closeness by initiating conversation, physical contact or other forms of closeness in the hope of feeling soothed and loved. They are not good at soothing themselves after an argument and need a lot of reassurance that they are wanted. If they do not receive this after repeatedly trying, they will go into a sense of not being enough. They will feel depressed or deflated.

Wave No. 2: The Angry-resistant Attachment Style 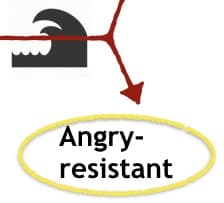 The angry-resistant style has been termed “allergic to hope”. Individuals exhibiting this style anticipate disappointment and failure in relationship, by using negative, angry behaviours (which paradoxically only serve to increase the chance of the outcome they desire the least).

Angry-resistant partners have an extreme need for closeness, to the point that this can seem insatiable to a partner. The exception to this is when they feel rejected, when they become angry and tend to punish their partner. They are acutely aware of the signals they are receiving from their partner (both verbal and non-verbal). They believe their partner should fight for them and they may set up “tests” for their partner in the hope they will prove they love them. If their partner fails these tests, they will feel unloved and unwanted and may lash out.

Island No 1: The Dismissive-Avoidant Attachment Style 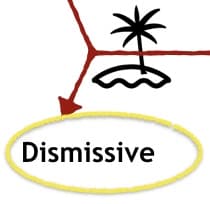 In this style the person subscribes to a one-person psychological system. The style is grounded in avoidant body-focussed reactions to early, infantile attachment relationships. The person may be quite unaware of how extreme this can seem to their partner.

The person has a reaction to approach by an intimate other, frequently finding this overwhelming and difficult to adjust to. “I want you in the house, but not in my room” (where I can let my internal world play out). The other is dismissed, either by a particular overt behaviour, or merely by being ignored. The other can feel undervalued. These people will tend to feel that they may not be cut out to be in a relationship, and may minimise the importance of the relationship. They can feel pressured by their partner’s desire for information or closeness.

Island No. 2: The Fearful-Avoidant Attachment Style 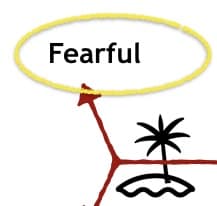 On the surface, this style looks like the Dismissive-Avoidant, but the difference is they are fearful of being alone. While the Dismissive is more consistency distanced, the Fearful is more “yo-yo”. The Fearful partner may feel they cannot get the relationship right; that too much is expected of them. They tend to have fantasies about other situations: being alone, being with an ex-partner or having an idealised version of their current relationship. They can find it hard to stay emotionally committed and present in the relationship.

The Fearful-avoidant person may not fully commit to the relationship, feeling they need freedom. They may even end the relationship. But when they do, they feel fear that they made a mistake and may not find another person who will accept them – so return to the relationship without dealing with the issues. And the cycle repeats…

How Knowing this Helps!

As with any model, this is a simplification of the subtle complexities within a couple relationship, and the unconscious and ultimately mysterious nature by which we bond and/or play out our issues and wounds within relationship.

But we’ve seen the model to be very valuable for many couples; enabling shame to be normalised and helping find an opening whereby new behaviours can enter into the relationship, and be tested for effectiveness.

An Example: A Dismissive Man & an Angry-Resistant Woman

Here’s an example of how the theory can help: A Dismissive man is in relationship with an Angry-Resistant woman, and they both misunderstand the signals coming from the other when they’re triggered, and both tend to react in a negative way, exacerbating the difficult connection between them very quickly. By knowing what their styles are, we can see that, when triggered:

Awareness is the first step. It enables both partners to take the reactions of the other less personally. Any new behaviours need to be practiced; and they need to address the here-and-now problems in the relationship, which happen very quickly and, if not questioned, merely serve to entrench the status quo. 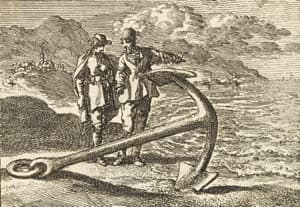 Couple Secure Attachment – Learning How to Use the Anchor!

The therapist, standing outside the couple’s dynamic, is able to observe the way the attachment “dance” plays out between the partners. (A dance which is often subliminal and conducted at lightning pace!)

The therapist is able to report on what they see, and in what way that dance is closing down the possibility for new levels of intimacy. And many couple relationships are in a state of waiting – for that potential next level of creativity and intimacy.

(The terms Anchor, Island and Wave are Stan Tatkin’s terms. The general approach described here is influenced by his PACT Institute work, though we’ve modified some of the terms and understandings based on our experience as Couples therapists since 2006.)