The Brain’s Response to Fear

Last year we attended an ANZAP seminar Understanding the Emotional Brain. This started with a stimulating talk by Lea Williams and Russell Meares followed by a lively discussion on the subject.

Lea Williams presented some recent work by her and her group on, amongst other things, the brain’s response to fear and its bias towards negativity. Our brains, from current research, evidently need five positive experiences to counter each single negative experience, in order to maintain a healthy equilibrium.

And the fear response in the brain is complex and exhibits a dual pathway – the so-called “low road” and “high road”. In the primitive low road, the thalamus quickly prompts the amygdala into a fight-or-flight response (say, in reaction to seeing a snake on the path before me). However the slower high road, via the visual cortex, enables potentially a more considered response. (I realise the snake is just a stick.) 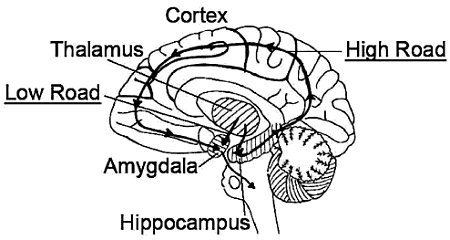 It’s not all bad news on negativity – research suggests that the plasticity of the brain is much higher than previously thought, and there’s potential for retraining negative brains in positive ways. And such positive ways tend to use the high road, rather than the immediate triggering of the low road. This research supports the efficacy of psychotherapeutic practices in creating new ways for the individual to react to old stimuli.