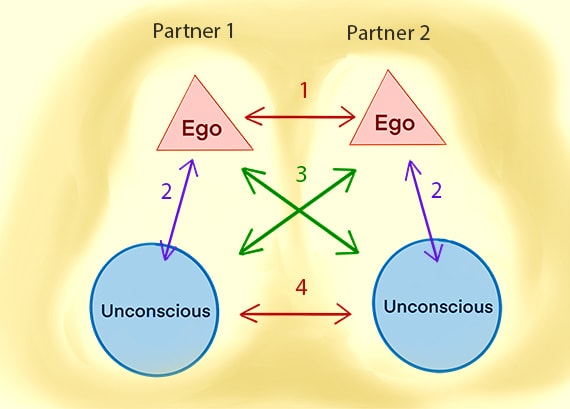 In this post, the second in the Despatches from the Retreat series, we want to look at relationships, particularly intimate relationships, and the potential dynamics between the partners.

With the difficulties of COVID-19, these dynamics can be an extra challenge, because many of us are forced to be in closer contact with our partners than would normally be the case. So points of friction, which we might otherwise have swept under the carpet (or fled from) can become exacerbated.

We’ll look at this from a depth-psychology viewpoint, which is a useful model for the complexities that occur.

The Depth-Psychology View of Relationships

The image above shows a depth-psychology view of a relationship, especially of an intimate relationship between two people (of same or different genders). Each arrow (all 6 of them) presents a form of the relationship that gets invoked.

A book could be written about the model above, but we thought we would try to distill it for the current circumstance.

(Note, as with all psychological models, they are only that, models to help us understand. Reality itself is always far more nuanced and complex than any model describes.)

These six relationships mean 12 points of relating, across the two people, only 2 of which are completely conscious (and 4 partially conscious). No wonder things sometimes go wrong!

Let’s look at the four kinds of relationship, marked 1 to 4 in the image above.

Ego is the conscious sense of self – the subject of our experience. Ego is the one we present to ourselves and to others as the “real deal” (however, it may not be quite that simple). The Ego has its “public relations” component, the persona, or mask, that we use to adapt to others and make a statement we’d like to make, that feels appropriate in a particular situation.

It’s the persona particularly that may be challenged in our interactions during unusual circumstances, such as the COVID-19 lock-down. It’s hard to be a senior executive when you must also be tutoring your kids or doing the laundry, all in the same workday. We may have to reflect on our ego, and how the egos of the others we are living with are affecting us.

(2) Ego with our own Unconscious

This is a huge topic, one we can only skim over here. It’s the subject of all deep psychological work: How can we have a dialogue, an open two-way relationship between our conscious ego and the vast (99% at least) of the psyche that remains unconscious to us?

Suffice it to say that successful work on ourselves is the precursor and best predictor of effective work on a relationship. We can work to change ourselves; we cannot work to change the other, for if we attempt to do this we will have fallen into the potential difficulties described in (3) below.

The Unconscious has an important historical component: much that has happened to us, good and bad, from childhood onward (and prior to our birth, as collective memory) is held unconsciously. It is these historical components that can hold sway over us, and can affect the functioning of the Ego.

(3) Our Unconscious with Ego of the Other

A feature of the Unconscious is that it holds these repressed elements, as we mentioned above. Another feature is that it continually involves itself in projection.

“Projection is a psychic mechanism that occurs whenever a vital aspect of our personality of which we are unaware is activated. When something is projected we see it outside of us, as though it belongs to someone else and has nothing to do with us. Projection is an unconscious mechanism. We do not decide to project something, it happens automatically. If we decided to project something it would be conscious to us and then, precisely because it is conscious to us, it could not be projected. Only unconscious contents are projected; once something has become conscious projection ceases.” †

Projection is a huge factor in the flavour of the Unconscious-Ego relationship, especially in an intimate relationship. We can never be without projection. But what we can do is start to become aware of what we projecting onto others.

There are levels in this: at a “micro” level we might be continually expecting our partner to behave in ways that we have programmed in from our childhood experiences with our own parents or siblings; or how things “naturally” work in society (“women do the housework”).

But at a “macro” level there the danger that the work we should be doing, we do not do: instead we project our lack in this area onto the other partner.

An example at this macro level is when a man has had a negative experience with his mother, and his feminine unconscious side (the so-called anima in Jungian language) has been wounded as a consequence. Instead of investigating this resulting internal misogyny, he projects the  “problem woman” out onto his partner – seeing her as lacking and negative in various ways.

Another factor that comes into play here is the contra-sexual side of each of us. Often we are not in contact with this, and it can play havoc in the Unconscious-Ego interactions.

“The contra-sexual element within us is so psychologically elusive that it escapes our complete awareness, therefore it always is projected, at least in part.” ‡

So a woman may project her “Shining White Knight” onto the man of her dreams, and only too late find that he is a primarily money-focused achiever who cannot give her what she wants (which is, actually, to have a relationship with that Knight living in her unconscious).

(Note this is unrelated to the genders of the partners – it applies in same sex as well as different sex relationships: we are usually, at some level, mainly at an unconscious level, trying to work out and redeem our contra-sexual side.)

In the example given, of the man projecting his negative mother onto women, the story does not end there.

She in turn, due to her unconscious predisposition, may “take on” this projection, feeling the very things that are projected onto her. (This is called projective identification.) So her ego response changes, as she begins to feel worthless.

We are now talking of interactions that are unconscious with unconscious, and these are difficult to investigate, since neither party knows what’s happening! This is exactly when a third party such as a therapist can assist as they may see the dynamic playing out, because they are not personally involved (and have seen it before).

“There is little doubt that such projective identifications occur. They feel wonderful when one senses that one has come home through the agency of the Other; they feel diabolical if one feels possessed by the Other. How many pogroms, martyrdoms, burnings, mass hysterias have scarred history, destroyed lives, because of … contamination between [the unconscious of two people]?” §

It is our intention here to offer a model for the complexities of relationships, which may in this difficult time be more in evidence.

The good news is that, often, if couples address issues they are having before there is a crisis, good work can be done in exploring some of the “skeletons in the closet”, and enabling the couple to feel relieved and better able to tackle the difficulties of the world they are facing.

As the Psychiatrist and Psychotherapist Iain McGilchrist says, you can take a poisonous gas (chlorine) and a dull reactive metal (sodium) and combine them chemically to form a harmless but very necessary white substance – salt!

A relationship, too, can undergo such an alchemical miracle, made from two possibly quite odd components!

If you wish are seeking to make a change in your relationship feel free to reach out to us for support.