Being Right and Being Wrong 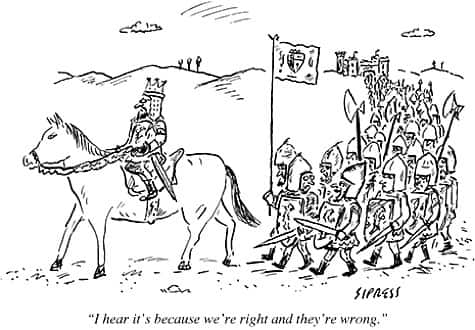 The difference between being right and being happy and healthy. See how attack and defence keep the problems stuck.

Don’t come to see us as a couple if you want us to take sides and decide who’s right and who’s wrong!

We never see couples issues as one person’s fault. They’re a dynamic between two people, and if the dynamic continues to reoccur then both people need to see their part in it. As they say: “it takes two to tango”; and we would say “two for an ongoing conflict”.

Most people are aware of the ways in which the armies of the world are relentlessly deployed in defence of a policy, an injustice, a religion. These are the fruits of holding a conviction. And who hasn’t also seen similar cycles of attack and defence play out in interpersonal relationships?

It’s within intimate relationships, where unfinished injustices and the guilt of the families we grew up in can live on, that the stakes can become particularly high. We can love and yet in a heartbeat we can also hate and want the other person to experience pain. Maybe it’s the sort of pain we think they have created for us. And all this can remain hidden under a veil of self-righteousness and pride.

This is heavy stuff! But (in our view) it’s much better to see the situation for what it is, to bring it into the light, rather than to let it remain hidden, where it can spoil the entire family.

This is our approach to couple dynamics, whether working with the couple together in therapy, or working alone with one of the individuals who wants to bring relationship issues to us.

Decide Why You’re Coming to Therapy

We say don’t bother to waste your time and energy in couples therapy if you’re coming to:

Instead, we’re interested to see the dynamic that’s operating in the relationship. This is the (mainly unconscious) agreement the two of you have made to negotiate being in the relationship. It’s the driver for what can then appear in that relationship as cycles of attack and defence. We want to uncover the feelings and motivations for the ongoing confusion or pain, not just talk at the surface level about your last argument.

Are you Willing to Go Further?

We cannot fix you; and we won’t take sides. But we can help you create a healthy relationship, if you are willing to go past right and wrong to see what is underneath the conflict and pain. We believe you will find it a rewarding experience.