Revelation and Intimations of a Dark Couple 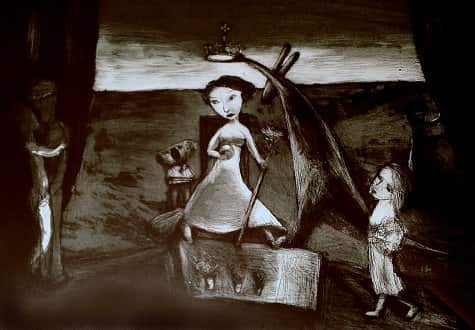 What can be revealed when a couple opens their eyes to the unconscious dynamics that rule their relationship.

We recently moved Revelation (image above) to our therapy rooms and it was interesting to do so – we began to notice it more than we’d done in quite a while (having lived with it at home for at least 10 years).

Shead’s work presents powerful icons of Australia and the Australian psyche: the strangeness of the land, the kangaroo and the koala; the way we relentlessly hark back to Britain and its monarchical structure; and of course the world of the displaced aboriginal (almost imperceptible to the right of the scene).

But what’s been capturing our attention recently is the couple in the shadow to the extreme left of the work, the dark couple.

A view in couples work is that every relationship has (to a greater or lesser extent) a dark couple. To call it the dark couple is a shorthand for those aspects of our relationship that we’ve agreed not to see, and that live out this unseen and unexperienced life.

In therapeutic language, it’s also called the unconscious dyad, or the dark dyad. (In Shead’s work, the embracing couple is to the left of the scene. The left side is often associated with unconsciousness.)

The dark couple is a consequence of an agreement, made by both parties to the relationship, to make themselves and the relationship safe; to deny the possibility (present in any relationship) of rupture and change. Ironically, this can be played out as fighting and a lack of trust.

The problem with such agreements being unexamined is that they stifle the relationship, and for some people, stifle a lively engagement in life generally. The couple constructs a co-dependent system in which neither party is challenged, but in which new growth cannot occur. As Nathan Swartz-Salent says in The Mystery of Human Relationship (in which he takes the work of medieval alchemists as a powerful lens for understanding couple relationships):

The union state that exists in relationships generally involves the unconscious elements of each party rather than the more conscious elements. Consciously, two people may seem to be loving and cooperative even while their unconscious dyad, which may be the major locus of the union between them, can behave in significantly different ways from the conscious image and values to which both people adhere. By its nature, the “dark” couple underlying the “conscious” couple is strange and usually unpleasant. For instance, the dark couple may be like two vicious animals locked in a life and death struggle, or as described in the Turba Philosophorum, two lovers locked in an embrace – one a human being and the other a serpent. 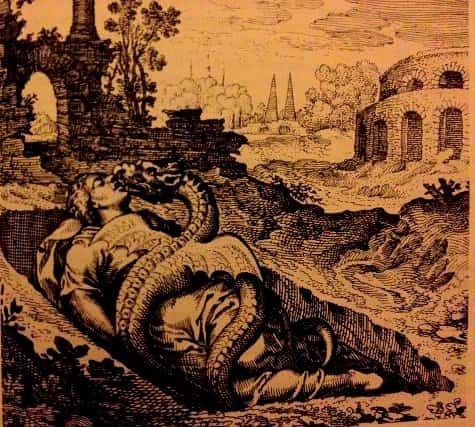 Union State (Coniunctio), from the 12th century alchemical text Turba Philosophorum. (The Turba recorded an important discussion between early alchemists, in which many of the key themes of alchemy were laid out.)

Working On The Dark Couple

We can start to tune our eyes and ears to the presence of the dark couple in our relationships (and this applies not only to our intimate relationships, but to business relationships and those with other family members). We might begin to notice the way little give-aways occur (such as a lifting of the eyebrows when our partner responds, or a caustic comment made as a “joke”).

The Revelation is in what, with an open attitude, we can discover. Just as in Shead’s work, there many things to be explored about the characters in the scene. What’s required is the ability to withstand the sense of wounding and injury we may encounter in seeing the darker sides of ourselves being laid bare. The danger in not doing so is that the energies contained within the dark couple subtly and gradually affect the life of the relationship and the environment of the couple; taking their toll on others, such as family members or colleagues.

Seeing the dark couple and realising the power it holds enables us to undergo a process of realising that we may have been acting in ways that are unconscious and destructive to the relationship, all the while believing that the opposite is true.

Previous post: I Want To Build Trust But S/he Is Not Trustworthy